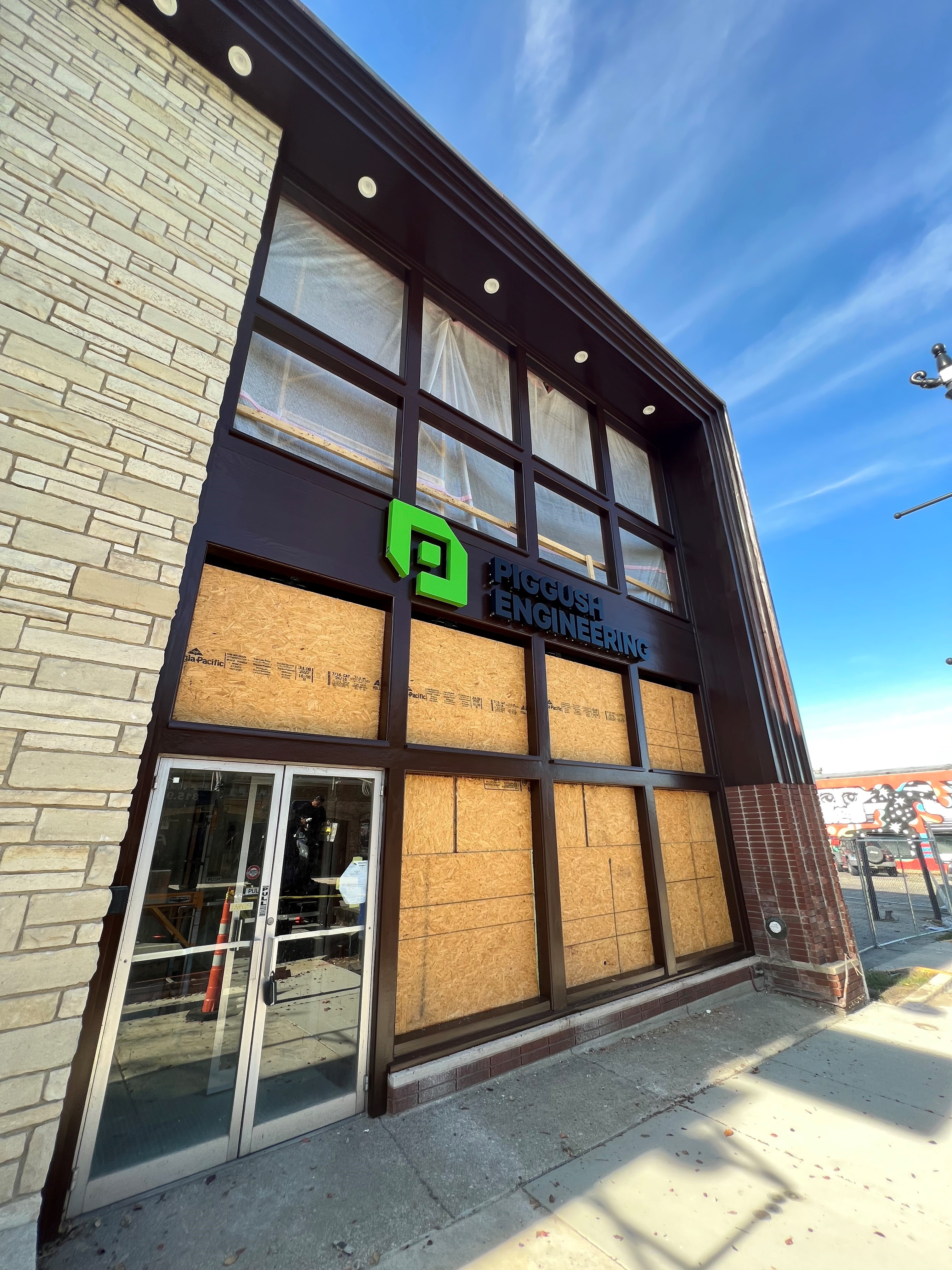 Led by Neil Piggush, Piggush Engineering continues to play a key role in the revitalization and development of Downtown Kankakee. Their most recent projects have included the continued addition of the bike lanes and the restructuring of the North and South Schuyler streetscapes.

While the North Schuyler streetscape updates continue, the team has also been hard at work at revitalizing their soon-to-be office space on North Schuyler. Previously occupied as a bank and empty since 2006, Piggush is bringing new life to a historical piece of Downtown Kankakee.

Piggush Engineering will be the end user of the space and will occupy the entire space with 0% vacancy.

Piggush noted that the hope is to move by April of 2023.

TIF funds are rewarded by the City of Kankakee for projects with the Downtown Kankakee footprint. The Piggush Engineering office rehab qualified for funds as the project entails rehabbing a historic asset within the Downtown.

The Illinois Enterprise Zone Act was signed into law on December 7, 1982. The purpose of the Act is to stimulate business investments and promote the creation of jobs in targeted areas through tax incentives.

Piggush was also granted incentives from the KDC Façade Program. The KDC Façade Program is an incentive to encourage building owners to improve the outside appearance of their buildings for their use or tenants use, as well as allowing for some interior work. To qualify for this program, the project must include a significant improvement to the building’s façade. The program provides a reimbursement of up to 25% of qualified expenses.  Qualified expenses include outside contractors and material costs associated with improving the street facing façade.

Piggush Engineering also put forth internal funds, as well as construction and mortgage loans to finalize funding for the project.

“Nothing would have happened without the different funding sources.” Piggush noted that they wanted to be within Downtown Kankakee and continue to dedicate resources to the revitalization of its history and the development of its future.

In order to qualify for any funding and incentives, Piggush Engineering first needed to determine eligibility. Eligibility for the various programs is based on building and project plans, historical status, business status, and job creation.

From there, plans for building were drawn up. The National Park Service (NPS) and the State Historic Preservation Office (SHPO) have a final say in what remaining historical fabric of the building they want to see preserved. For example, the original bank safe. To incorporate this existing historical piece, Piggush Engineering will strip, repaint and permanently close the existing safe doors to make it a showpiece in their conference room.

They also needed to retain the facade on the front and the windows as well as keeping the existing windows on the North wall.

Piggush will utilize local business, Restoration Works, to do the façade which includes stripping (previous paint and stain), staining, and sealing.  Other local Kankakee firms that were utilized on the project were the general contractor Piggush Simoneau, Inc., as well as Glade Plumbing and Heating, Ruder Electric and Langlois Roofing.  Peoples Bank of Kankakee County provided the construction loan and permanent financing for the project.

The building is in need all new electrical, HVAC, and plumbing. The existing elevator needed to be replaced as well.

Neil Piggush stated that they are currently at 15 employees and the space will allow them to grow to 24 - utilizing the first and second floor as well as storage in the basement.

Discussions have been had on a mural on the North outside wall. Before movement can be made, the National Park Service (NPS) and the State Historic Preservation Office (SHPO) will need to be consulted for approval. With the mural, they will keep and incorporate the 1912 painted sign that is currently on the North wall. And they stated they will use and engage with local artists to see that mural come to life.

As mentioned, the original bank safe will be kept and preserved within their conference room.

Neil Piggush shared that they wanted to be a part of the Downtown revitalization and the rebirth of the area. “That meant a lot to me. I had not been in the building before. We walked through in February 2021, and I knew I wanted it. It needed a lot of work, but we saw the potential. And I knew we had the stamina to figure out how to make it work,” said Piggush.

“I think for us, we have a younger team, and the sense of place and being connected matters to all of us. People want to be in downtowns. Having local places we can walk to and get lunch, or walk to the Depot Park, it’s going to matter going forward. And from a business standpoint, being closer to people we do business with such as attorneys, the County Recorder’s office, title companies, and City Hall, it all just made a lot of sense for us.”

“The building is unique - there is nothing else really like it. We are really excited to bring it back to life. I think everyone talks a lot about what Kankakee used to be and this is a way to tie that local past to the present and future of the city.  I really feel that this building mirrors Kankakee’s journey, a vibrant and prosperous past, a period of struggles and hard times and a rebirth to a bright and promising future.”

We Don't Do It Alone

A special thank you to those who have played a key role in this development. 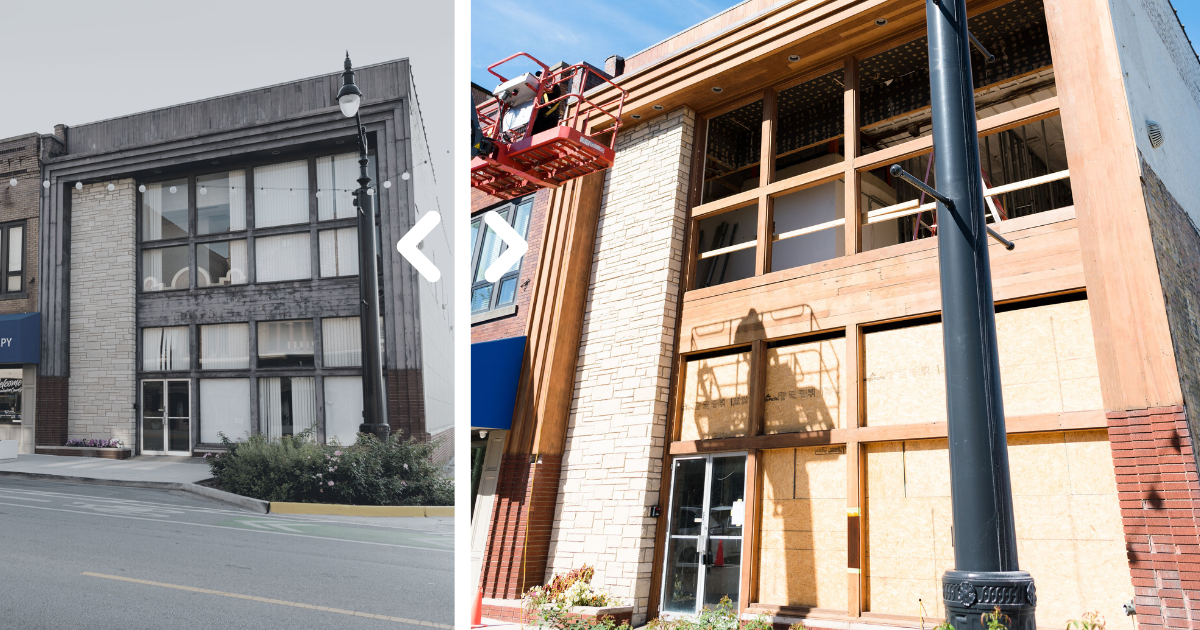 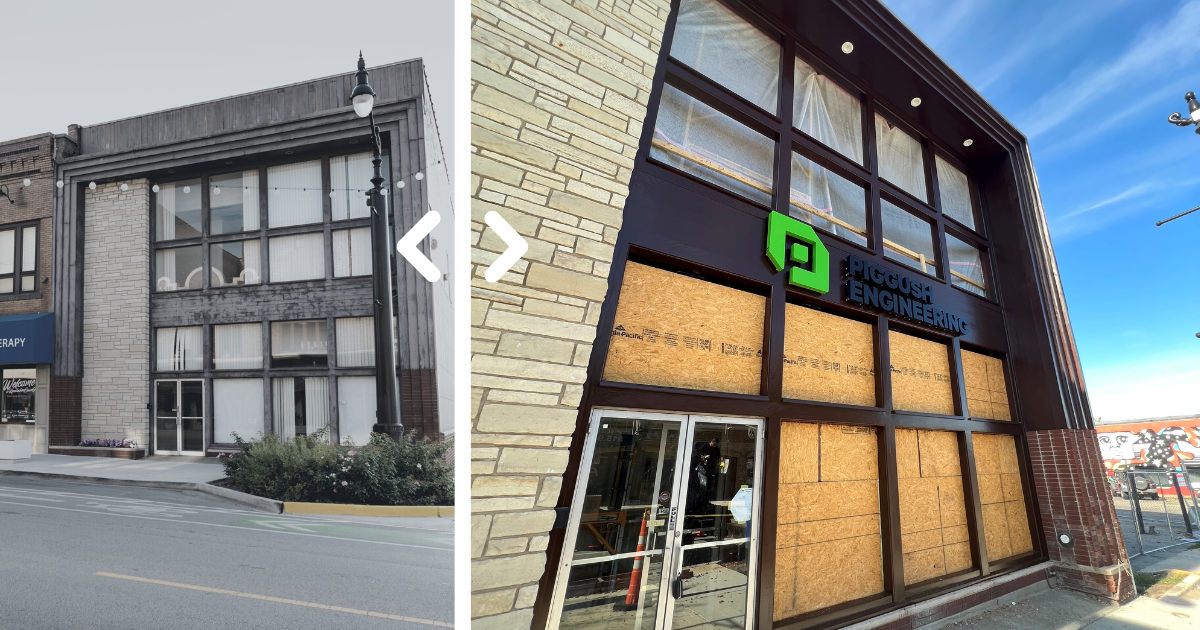 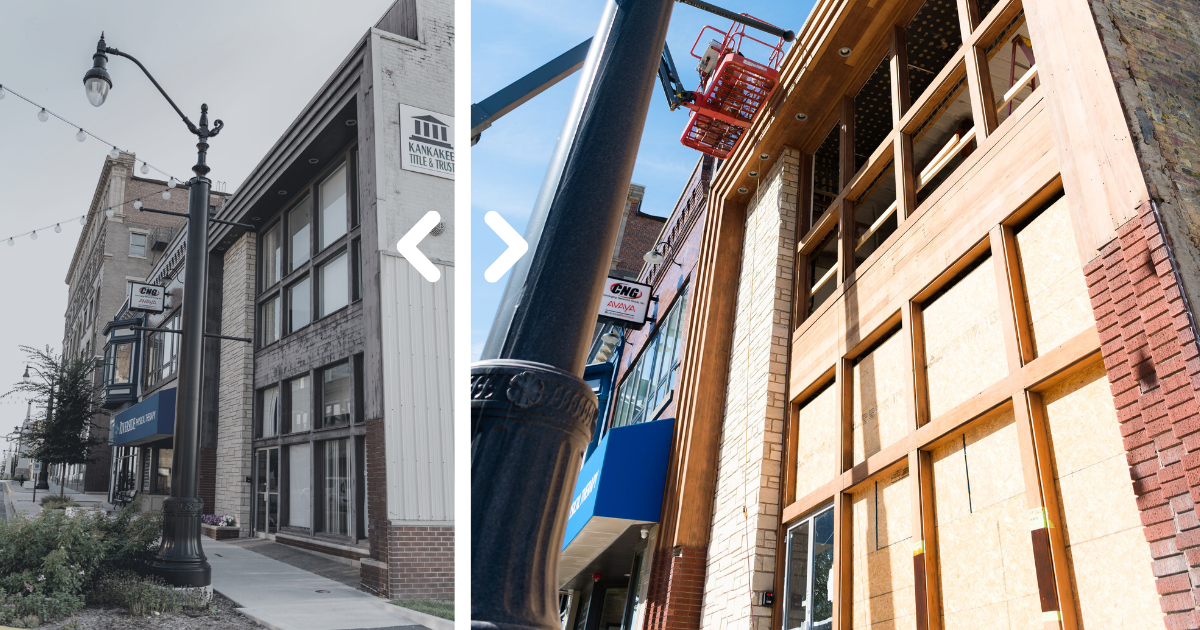 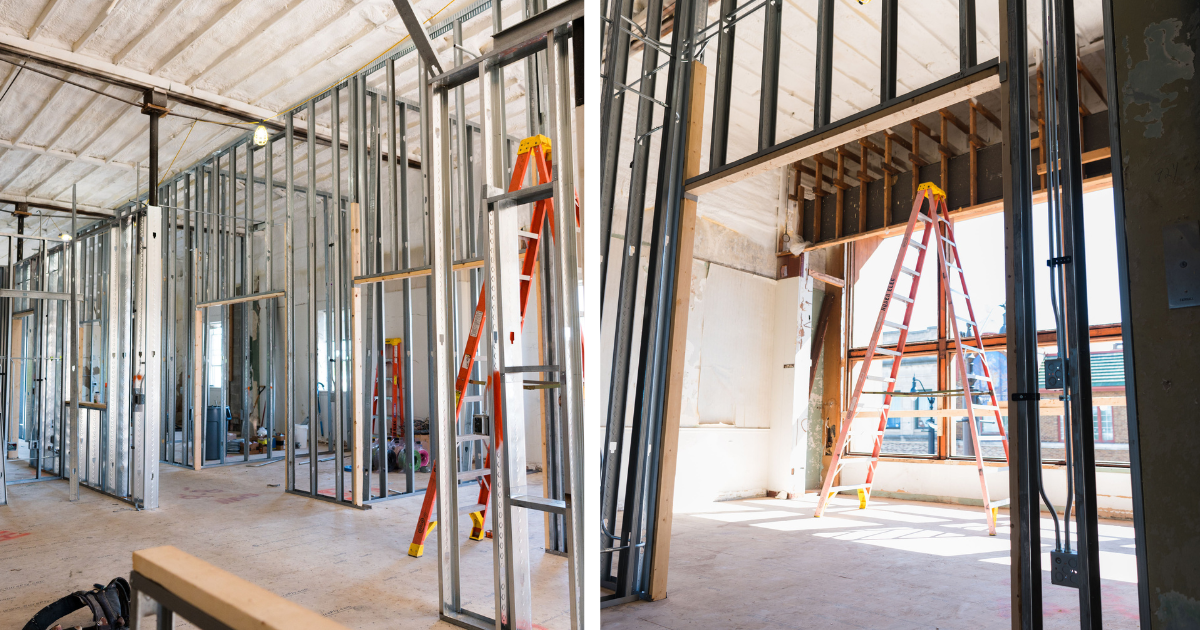 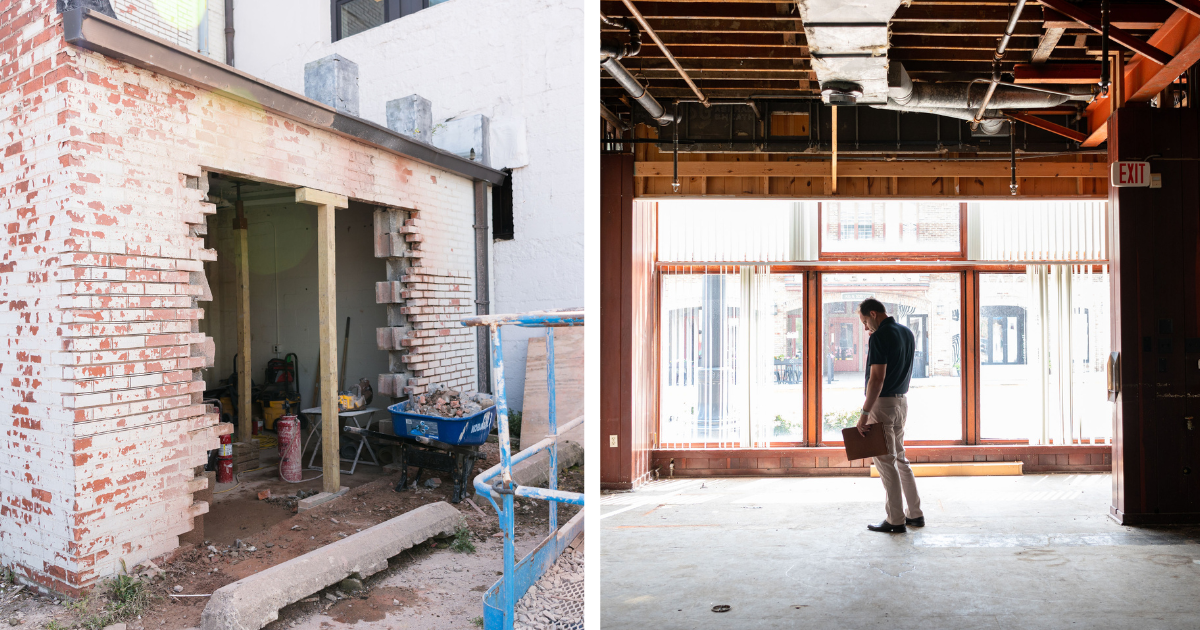 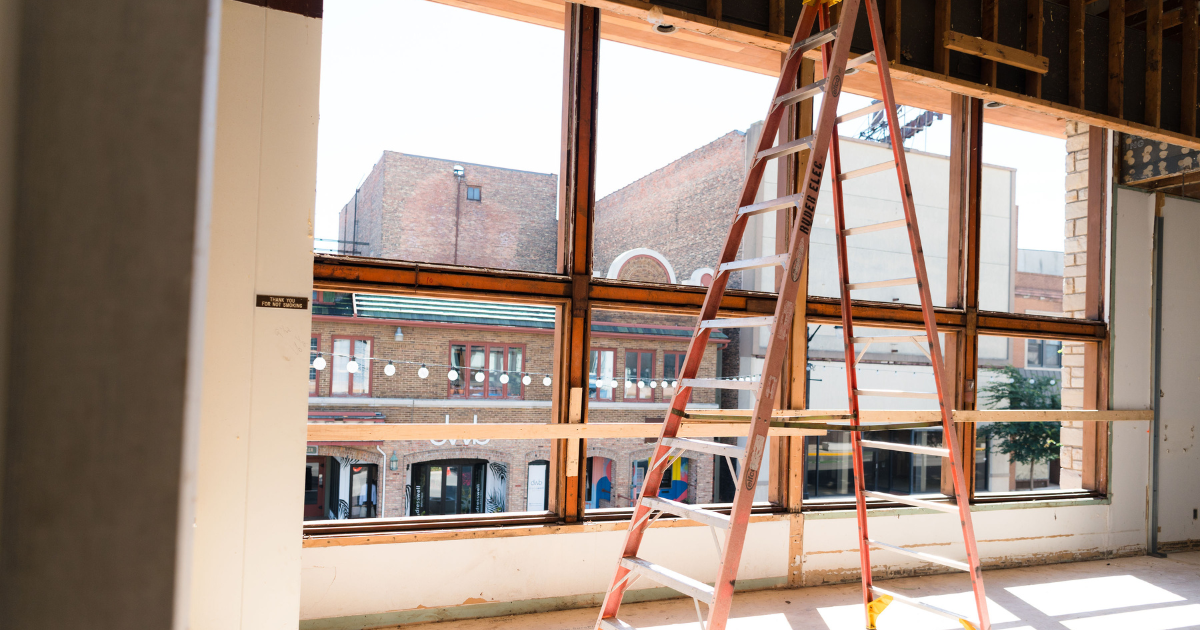 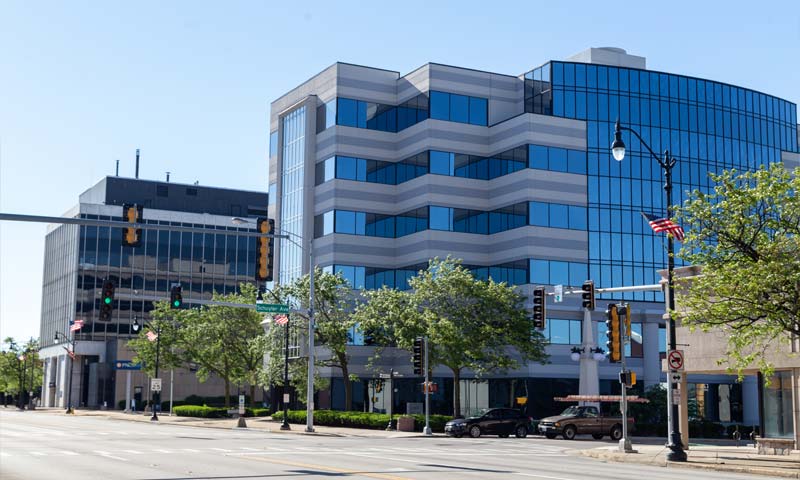